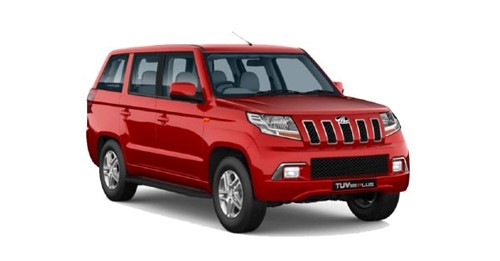 Mahindra has always pioneered in making utility vehicles. So much so, the compact sub-4m space alone has four offerings from Mahindra where every other mainstream manufacturer has a single option.

The TUV300 drew a lot of heads for when it first came into the Indian market. Amidst all the urban monocoque-based SUVs, Mahindra took a rather different approach with the TUV300, building it on a ladder-on-frame chassis. While it was still under 4m in length, the other gigantic proportions made it look a size bigger than its rivals. This worked for the consumers who wanted a compact SUV that stayed true to its genre.

But Mahindra didn’t just stop there. It knew the platform of the TUV300 had a lot of potentials and subsequently launched an elongated version of the TUV300 with the ‘Plus’ suffix. Therefore, the bigger TUV300 borrows a lot of cues from its smaller namesake sibling. But it does make a case for itself in more departments than one. Here’s what we think.

It’s hard to distinguish the Plus-sized TUV300 from its regular sibling on a first look. It still carries over the same set of headlamps, with the only giveaway at the front being a tweaked fog lamp housing. The differences are more prominent in the side profile, where the additional length is visible from C-pillar onwards. It also gets 16-inch alloy wheels, a size bigger in comparison to its sibling it’s based upon.

Under the hood of the Mahindra TUV300 Plus is a BS-IV compliant 2.2-litre four-cylinder mHawkdiesel engine, which is good for 118bhp and 280Nm of torque. Mahindra has revealed that it will be updating this engine to meet the BS-VI emission norms earlier. As of now, the engine only comes mated to a 5-speed manual gearbox as a sole fit.

Despite its large size and a higher-capacity engine, the fuel efficiency figures of the TUV300 Plus suggests it is a frugal option. In its current BS-IV guise, the 2.2-litre diesel engine is rated to deliver 18.49km/l.

This is where the TUV300 Plus feels a bit underwhelming. You see, while the competition has moved to a crazy number of features in this segment – even its sibling, the XUV300 comes loaded to the brim – the TUV300 Plus lacks a bit of finesse and it has a mere equipment list.

Regardless, the top-of-the-line variant of the elongated TUV300 gets you a 7.0-inch touchscreen with Bluetooth, AUX-in, and iPod connectivity. Moreover, there’s steering-mounted controls, electrically-adjustable ORVMs, a remote key with central locking, and much more. You do, however, miss out on connected car tech and other connected features such as Apple Carplay and Android Auto. The addition of faux-leather upholstery over the standard TUV300, though, is a nice addition.

All the details regarding the Mahindra TUV300 Plus, namely, the engine, specifications, variant wise equipment, colours, dimensions, interiors, and exterior details are extensively covered in the brochure.

As of early-2020, the Mahindra TUV300 Plus is available in three variants, withjust one powertrain. The prices start at Rs. 9.93 lakh for the P4 variant going all the way to Rs. 11.42 lakhs for the P8 variant (both prices ex-showroom, Delhi). For the variant-wise on-road prices, visit us at autoX.

For more on the Mahindra TUV300 Plus, be sure to tune in to autoX.  Also, read the latest car comparisons, only at autoX.